Instituto Laboral de la Raza held its annual Community Awards Banquet last Saturday, April 6, giving Boxer & Gerson an opportunity to renew its longstanding ties to the organization that has been providing support and legal advocacy services to low income workers and their families in the Bay Area since 1982. Associate Attorneys Hillary Nakano and Dikla Dolev attended on behalf of the firm, which has served as an awards banquet sponsor over many years and shares in the organization’s goals to serve disadvantaged workers who face challenging circumstances in their jobs and lives. The Community Awards honors multiple individuals or groups annually who have helped advance the mission of Instituto Laboral de la Raza, either locally or on the statewide or national stage. Past recipients have been drawn from the labor movement, politics, nonprofit organizations, and many other fields. 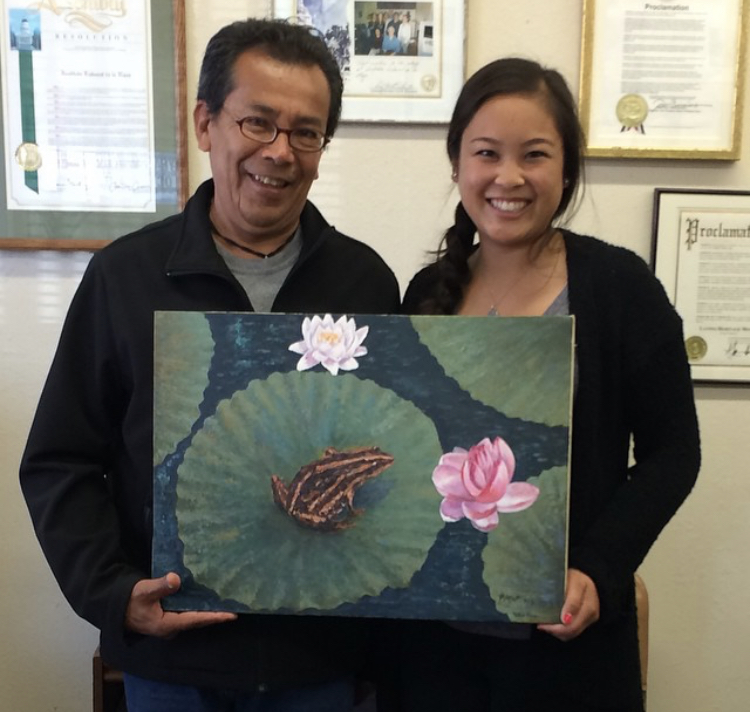 Gifting Nakano with a painting of his in appreciation of her effort.

For Boxer & Gerson attorney Nakano, it was a chance to renew ties with an organization she first came across as a law school student at the University of San Francisco in 2014. Among Instituto Laboral’s many community programs is an arrangement for clients coming to their organization for assistance in resolving wage and hour disputes. It pairs them with advanced law students who are able to represent the clients in front of the labor commissioner on a pro bono basis.

For Nakano, it was a real world taste of what awaited her in the legal field, made all the sweeter by winning the case for the client who was seeking to recover wages that had been denied him by his former employer.

“That was a happy occasion for all of us,” she said. “It made going to this event feel like I’d come full circle.”